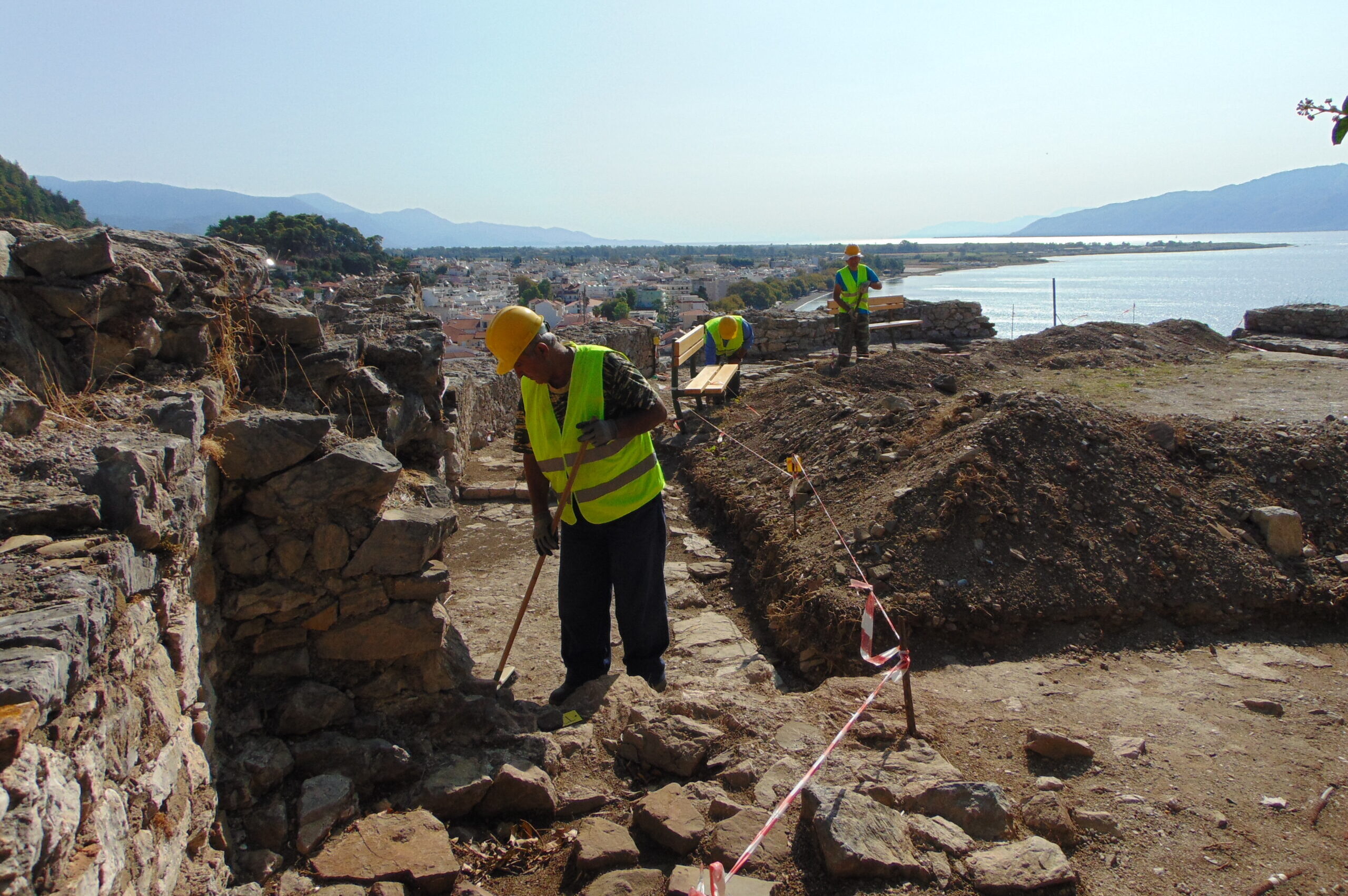 CASTLE OF NAFPAKTOS: WORK IN PROGRESS

Ephorate of Antiquities of Aitoloakarnania and Lefkada is responsible for the works at Aktio Fortress, Vonitsa and Nafpaktos Castles. The works in all three castles started in the summer of 2020 when the recruitment of the required personnel was completed according to the current legislation. Immediately, hand tools, technological equipment (laptops, printers, digital cameras, etc.) were purchased, the supply of fuel was contracted, project launch signs were placed at the castles, and the first aerial photography of all three monuments was carried out.

The supply of building and special building materials and the rental of various (for each castle) vehicles-machines with operator – after a tender – are in the stage of contracting. The scientific staff of the project (archaeologists and architects) conducts historical and archaeological research for all three castles. The composition of studies began, as well as the collection of the necessary display material (drawings, engravings, old photographs, etc.). At the same time, entries are being written, and display material is being collected for ca. 15 more Byzantine and post-Byzantine castles in Aetolia-Acarnania, material that will be used in the implementation of the permanent digital exhibition at the Castle of Vonitsa.

A detailed photographic archive for each monument is gradually created (photographs with details of the fortification and the various monuments inside, as well as photographs before, during and after the completion of each work).

As part of the project, purifying and excavation works were carried out in the bastions of Oraia Dapia and the Clock/Bell-tower, in the south-eastern part of the walls of the Castle of Nafpaktos. It should be noted that these are two of the best-preserved bastions of the castle, which on the one hand protected its gates and vulnerable parts, on the other hand, had full supervision in the wider area. Their construction phases were investigated for the first time, with significant movable finds (pottery, coins, metal and stone objects, glass fragments), which are expected to provide important information on their later use. The works were extended to the allure (wall-walk) and along the exterior of the fortification walls but also to areas under the jurisdiction of the Archaeological Service. It is noteworthy that at the curtain wall, north of the Bell-tower bastion, remains of a four-sided tower were unearthed.

Then, scaffolding was placed in the section west of Oraia Dapia for the restoration works foreseen in the implementation of the CoHeN programme, the workplace was fenced, and the project was marked with an information sign, the removal of the vegetation began, the loose mortars were removed, and the surface of the fortification walls was washed, so that they are now prepared to undergo restoration. At the same time, two studies, architectural and static, are completed and delivered (after tender procedure)  to the Ephorate concerning parts of the north and east walls of the Castle.

The project envisages the organisation of a permanent exhibition in four rooms at the Castle of Nafpaktos, which will cover the evolution of the impressive citadel during the Byzantine period when it played a decisive role in the wider area. For the implementation of the exhibition, the compilation of the museological study is completed with the objects that will be included in it, and at the same time the museographic study is being composed. The specialised staff has undertaken the conservation of the material deriving from excavations in the city of Nafpaktos for the exhibition; these consist of stone sculptures, coins, pottery, of the Byzantine and Ottoman periods, jewellery, tobacco pipes, and other small finds.

This project is co-funded by European Union, European Regional Development Fund (E.R.D.F.) and by National Funds of Greece and Italy.

All photos and videos are property of the institution that provides them. Puglia Region, as a partner in charge of publishing CoHeN contents, does not assume any responsibility for copyrighted material provided by project partners without authorization. The responsibility rests with the partner who provides the material.